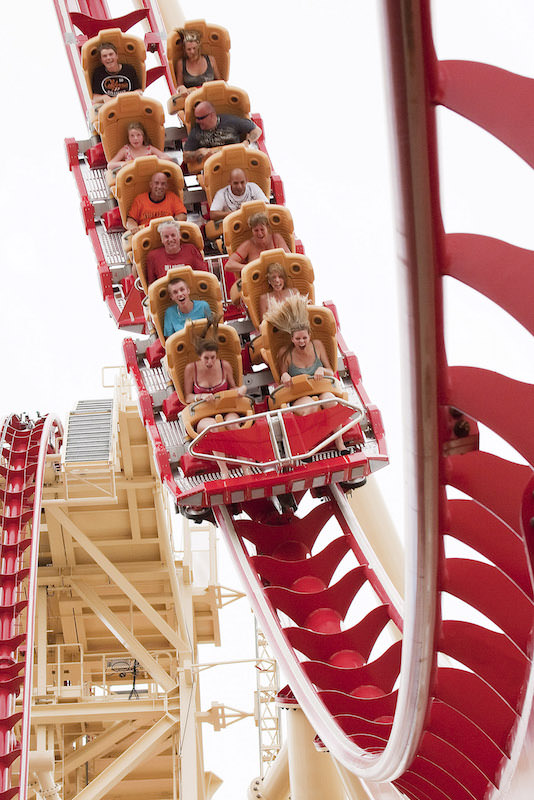 Universal Studios Florida is filming a music video and they’ve decided to cast you to star in it! Hollywood Rip Ride Rockit is an innovative roller coaster that lets you choose the music you want to listen to during the ride and features first of its kind maneuvers including the Jump Cut, the Treble Clef and the Double Take, the world’s largest non-inverted loop.  Whatever song you choose becomes the soundtrack, while on and off-board cameras capture every second of the action making a video that can be purchased digitally or on DVD.

In the queue, songs from the ride play in the background to help the song selection process once you board the coaster. On each specially designed X-CAR, there are 6 rows with two seats in each row. Another unique element of Hollywood Rip Ride Rockit is the vehicles never completely stop for you to get in. You walk onto a moving platform, similar to the one at Harry Potter and the Forbidden Journey, and have twenty-three seconds to make it into the car traveling beside them. Once you’re in and choose your song, you take off up a 90-degree angle hill and its all downhill from there.

Some of the coolest aspects of Hollywood Rip Ride Rockit are on the vehicles themselves. A Guest Interface Panel is built in to each lap bar and allows guests to pick their songs from the list of thirty songs. However, there are also secret songs available to choose if you press the push and hold the logo for around ten seconds. After letting go, a keypad will pop up and you type in any random number to hear a hidden track. Each train is also equipped with Polk Audio speakers that pump out 90 decibels of music. Each vehicle lights up during the day and night due to the 36 different LED color-changing, programmed lights which can be steady, strobe, twinkling, racing or pulsing

Merging the thrill of a roller coaster with the emotional rush of rock music is brilliant. The combination can provide

END_OF_DOCUMENT_TOKEN_TO_BE_REPLACED

At approximately 2:20 PM, @thetimtracker and @TheJennTracker are reporting on Twitter that the metal detectors have been removed and the test is